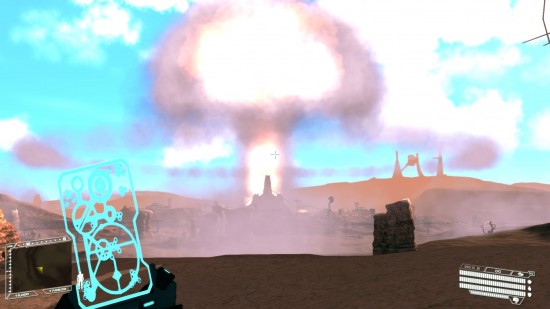 Last week, on Sept 16th, the game, having been flagged as F2P and Early Access, went live on Steam and a bunch (3000+ according to Valve) of people were able to download it without buying any of the Early Access tiers.

Once we discovered the snafu we notified Valve and had them fix it since we have no control over that sort of backend process.

As an added precaution, the F2P flag (which is valid for the final version release in Q1/15) has since been removed so that the game no longer shows up in those Steam filters.

Unfortunately, a number of those people who did manage to download the full 13GB game, tried to play it and couldn’t do so because their entitlement was reverted. As a result, they lost access to the game.

Some were quite upset that they could no longer play a game they gained access to in error. And some of those – in a violation of the Steam TOS – decided to leave spiteful negative reviews of a game they neither owned, nor had access to for more than a few minutes and which they simply couldn’t play. You know, the same sort of people who abuse the Steam forums, Steam game tags and of course now the Steam game curator system. You know who they are.

We even extended the 50% discount (which was in effect since Sept 10th) by an additional 48hrs and which brought the lowest Early Access Tier down to a mere $19.99.

The most important thing to note here is that all these Early Access tiers have physical goods. So even if we wanted to let all 3000+ people keep the game, we can’t, because we want the physical goods – which are already on limited supply and “first come, first-serve” – to go to those who have paid for the game and genuinely showed their support for the game.

We know that a lot of you are excited about the game; but the whole purpose of pricing this Early Access tiers this way is so that we can attract a specific dedicated crowd during the next three to four months of testing. It is a very large and involved open-world game. We’re a small indie team. For those reasons and aside from the fact that we do not have the resources, we simply don’t want to be distracted by large numbers of players who – for the most part – won’t contribute any meaningful feedback to the game.

For example, we stagger released the game in order to focus test various aspects so that we don’t end up missing critical things. In fact, since we released the game on Sept 16th, we’ve had three major updates, which contain a wealth of interface, world and character issues reported by those who bought the game and which we have now addressed.

This is going to be an on-going process. If people were running around with weapons of mass destruction, vehicles, aircraft etc, they’re not going to be focused on world and character issues for the most part. And those are the things that end up falling through the cracks and remain in a released game. Which is why we are going to be releasing parts of the game on a specific schedule for extended testing. For example, we launched with Heatwave planetary base and the GCV-Starguard carrier. Yesterday we unlocked the Nightbridge planetary base for extended testing.

Those who have bought and are currently running through the game, are doing things like this. That is exactly what we intended.

We aren’t even giving out Steam keys to the media, YouTube personalities, TwitchTV streamers etc who have asked because the game is in Early Access, not all the features are available or unlocked and it won’t be ready for official launch until sometime in Q1/15. We simply do not want to send out the wrong message.

I hope this clears things up and sets the record straight as to what exactly happened.

Simply put, if this is your sort of game and you want to help us make it the best that it can be, then join us. If not, please stay away from the game because we have better things to do with our time than to be catering to anti-social nonsense on a daily basis.